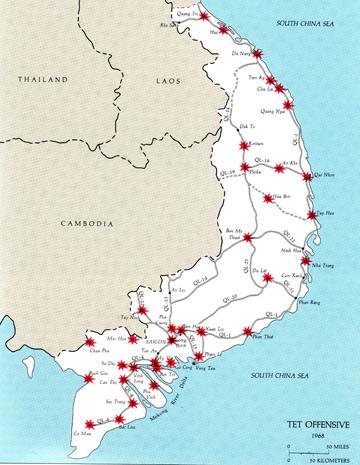 (Above:Targets Of The Tet Offensive)

The Tet Offensive was a campaign of battles mostly along the cost of Vietnam. It was called The Tet Offensive because it began on the Vietnamese New Year called Tết Nguyên đán which occurs on Jan. The North Vietnamese referred to the operation as Cuộc Tổng tiến công và nổi dậy or General Offensive and Uprising, because the target of the offensive was to control several south Vietnamese cities and cause an uprising with an eventual outcome of bringing down Saigon.

Both North and South Vietnam announced that there would be a cease fire during the holiday.
However, on the morning of the 31st North Vietnam launched a wave of attacks mobilizing about 80,000 troops and simultaneously targeting over 100 towns held by allied troops (U.S. and South Vietnam). The Attack caught the allied forces off guard but quickly controlled the situation. 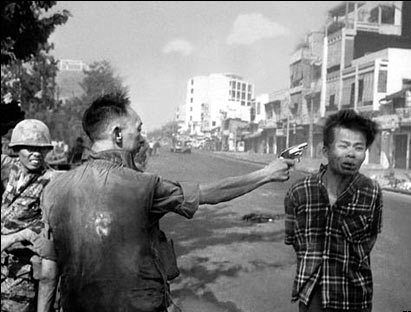 In the end North Vietnam was defeated in its campaign. The victory was somewhat hollow because the allied causalities outweighed the Communist’s and also no one previously had believed the communist party was capable of such a large scale attack.