Jane Fonda is an American actress best known for her work in the 1968 movie, Barbarella. Throughout the Vietnam era, Jane was a vocal critic of U.S. troops engaged in the Asian country, referring to them as “war criminals”. Fonda caused a stir in August 1972 when she travelled to North Vietnam in order to protest the American bombing campaign. While sitting in the seat of anti-aircraft cannon, Fonda gave a radio interview in which she called upon the U.S. to halt the bombing, calling then-President Richard Nixon a killer. The full interview transcript can be found @ http://www.rjgeib.com/thoughts/fonda/fonda.html 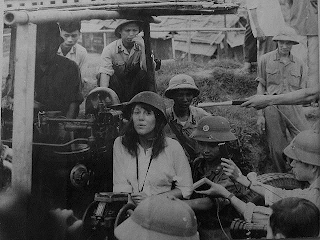 Fonda’s reception in the United States after her trip to North Vietnam was chilly at best. She began receiving death threats and letters condemning her betrayal of the United States, and was dubbed “Hanoi Jane” by the press. In 1988, she sat down for an interview with Barbara Walters and admitted that she had some regrets, apologizing to American POWs and their families for hurting them, but also stated that she was proud of her anti-war activism.