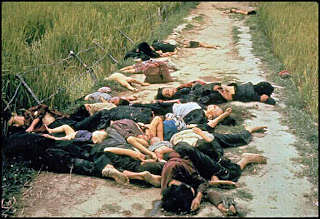 My Lai Massacre
On March 16, 1968 a mass murder by a unit of the U.S Army of 347 to 504 citizens in South Vietnam. A majority of the victims were children, women and elderly people. In the hamlets of My Lai the victims were found, many of them sexually abused, and tortured. There was only one man convicted of the criminal actions. His name was William Calley. He was charged with six specifications of premeditated murder for the deaths of 104 Vietnamese people. After the massacre the whole world sprung into an outrage and the U.S army lost a lot of support back home.
Posted by bigzcal at 11:34 AM