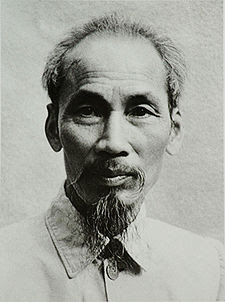 I am blogging about Ho Chi Minh. He was born May 19, 1890 and lived until September 2, 1969. Mr Minh was a Vietnamese Communist revolutionary and statesman who was prime minister from (1946 until 1955) and president of the Democratic Republic of north Vietnam from(1945–1969). He lost all political power in Vietnam around the 1950’s; however he remained president until his death. The former capital of South Vietnam, Saigon, after the Fall of Saigon, was renamed Ho Chi Minh City in his honor on may 1, 1975 shortly after its capture which officially ended the war. Mr. Minh was also a man who embraced communism. The 1954 Geneva accords, between France and the Vietminh, provided that communist forces re-group in the North and non-communist forces regroup in the South. Mr. Minh’s Democratic Republic of Vietnam relocated to Hanoi and became the government of North Vietnam, a Communist-led single party state. In Vietnam today, Ho Chi Minh is regarded by the Communist government with almost god-like status in a nationwide personality cult, all though the government has abandoned most of his economic policies since the mid-1980s. He is still referred to as "Uncle Ho" in Vietnam. Mr. Minh’s image appears on the front of every Vietnamese currency note, and his portrait is featured prominently in many of Vietnam's public buildings.
Posted by Josh Bell at 11:13 AM