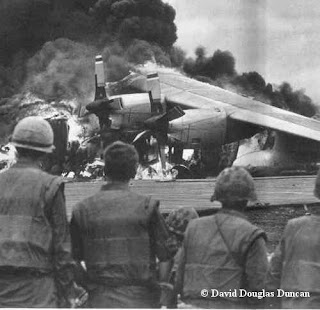 The Battle of Khe Sanh was located in Quang Tri Province, Republic of Vietnam. It was between January 21st and April 8th in 1968 and took place during the Vietnam war. Khe Sahn was located where North Vietnam, South Vietnam, and Laos came together. For the communists, the region around Khe Sahn was a major avenue for their entry into Northern South Vietnam. For the Americans, Khe Sahn would allow them to observe traffic on the Ho Chi Minh Trail. According to the U.S. Marine corps history of the battle of Khe Sanh, the PAVN response was to infiltrate South Vietnam by an end-run around the DMZ. The Khe Sanh are was a logical avenue of entry. The PAVN main trust was an attack designed to overrun the Khe Sanh combat base and capture the airfield. A successful secondary attack was launched against the nearby Special Forces camp and Lang Vei. the Marines airlifted two battalions to infantry to Khe Sanh. Several days of fighting allowed the Marines to defeat the PAVN attack and end the first PAVN attempt to take Khe Sanh. The conclusion that the primary motive of the North vietnamese was to overrun the base, and that a diversioni was only secondary. Giap had successfully achieved his diverson and had nothing to lose by continuing the fight with the intent of overrunning the Khe Sanh Combat base. In April of 1968 the Marine regiment of Khe Sanh was relieved and it's units were assigned elsewhere throughout I corps. In June the U.S. command in Vietnam decided to avandon the base at Khe Sanh. In July the last marine departed Khe Sanh in fear that the communists would take propaganda pictures of the combat base. Although both sides claimed victory, Khe Sanh provided neither clear victory nor definite defeat for either adversary. Both sides withdrew and Khe Sanh once again became merely unimportant. No understand of the significance of the battle of Khe Sanh is possible if the fighting there is considered in isolation. Khe Sanh was a part of the Tet Offensive, which itself was a art of the target year long Communist Winter-Spring Offensive. For the Americans, Khe Sanh was meant to be the best opportunity to implement the strategy of attrition, to destroy Communist military forces.
Posted by kayla peressini at 10:49 AM