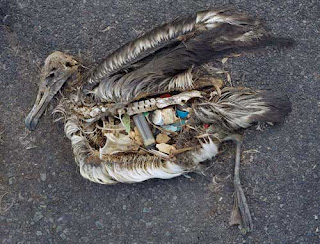 Plastic found within the stomachs of Birds
Somewhere out in the middle of the Pacific Ocean there is a large trash buildup called the Great Pacific Garbage Patch. It is an area where trash from humans has constantly built up over the years, and has caused quite a ruckus amongst people concerned for nature. Many have concluded that it is about the size of Texas, if not bigger and it really makes you wonder how we’ve let something go as far as this has. To explain the sudden arousal it has been argued that this trash heap is also almost impossible to see as the majority of the pollution/plastic lies beneath the ocean, affecting the marine life around it.
It was then that a photographer by the name of Chris Jordan was able to find proof supporting the fact that marine life had indeed been affected by this pollution. It was in the fall of 2009 that Jordan visited the Midway Atoll in the Pacific Ocean. Only then to find birds known as Albatross containing plastic within their stomachs. The albatross that he happened to come across were chicks that had been fed the plastic by their unsuspecting parents. The parents had mistakenly thought the trash was food thus resulting in the poisoning, choking, or suffering from deadly blockages in the throat. Thousands of albatross chicks had also suffered the same fate.
This really makes a person wonder at all the other things we as humans contribute to. If we have caused the death of many of these albatross chicks, what else have we endangered in our lives? What other creature have we laid harm upon and how will this affect our future as American citizens? Are we poisoning, choking or making our lives suffer just as much?
Posted by Austen Tabor at 12:20 PM