350 Day of Climate Action Awareness Protests Across the World 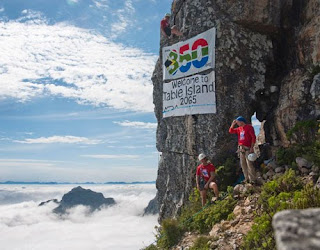 Yesterday began a stream of rallies to raise awareness of the "350 day of climate action". These protests took place in over 181 countries. 350 is a special number, as it is what scientists believe to be a safe concentration of carbon dioxide in the atmosphere in parts per million. As of now the carbon dioxide concentration is 387 parts per million. These rallies took place in order to raise awareness about this. For example, in the above picture mountain climbers hung a giant 350 banner on the cliffs of Table Mountain in South Africa.
Posted by Jake at 12:11 PM