Food Coloring can cause hyperactivity in kids 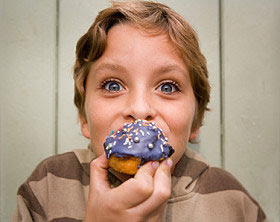 In this article it is talking about that it is not the natural sugar that makes kids hyperactive but actually the artificial coloring that is in the foods. Food coloring is used in frostings, sprinkles, drinks, cake mixes, and other packaged foods. In 2008 the Food’s Standard Agency (FSA) requested major food manufactures to ban six artificial food colorings. On the foods containing these food dyes there is a warning on the label about how the activity of kids can be affected. The Center for Science in the Public Interest (CSPI) also called out 8 food dyes. This being another reason why it is better to stay away from the packaged foods and eat real foods, such as fruits, veggies, grains, and eggs. The dyes that are being called out by these two organizations are: Yellow 5, Yellow 6, Red 40 (both groups) · Yellow 10, Carmoisine, Red 4 (FSA) · Blue 1, Blue 2 Green 3, Orange B, Red 3 (CSPI)
Posted by bigzcal at 4:44 PM