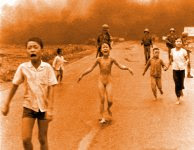 Napalm use in the Vietnam War was successful and incredible inhumane use of chemical warfare. Although it was a harsh use of war, it did kill and injure a significant amount of people. Napalm bombs were basically bombs filled with a gas the once it explodes, it releases a large amount of carbon monoxide into the air suffocating anyone who is near the explosion. The gas does more than just suffocate since it is a carbon monoxide gas laces with gasoline. It immolates people which means burns their skin as much as third degree burns killing nerve endings permanently. Another word for these type of bombs used was flame throwers.


Carpet gas was just another type of chemical warfare used on victims of the Vietnam War. Many people who died from such types of warfare were often innocent civilians. They were not always necessarily soldiers. For example in this picture is a naked child who is crying from the napalm burning through her skin.
Posted by Sam Black at 11:14 AM