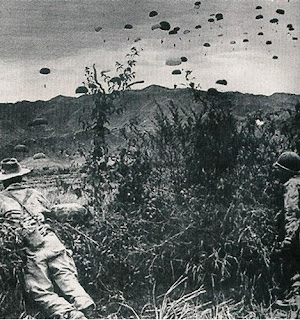 The battle of Dien Bien Phu was between the French Expeditionary Corps and the Vietnamese (Viet Minh) communist revolutionary forces. The battle last approximately three months, March-May 1954. It was a climatical French defeat that ended the First Indochina War. This battle has been called “the first time that a non-European colonial independence movement has evolved through all the stages…organized and equipped army able to defeat a modern Western occupier in pitched battle” according to Martin Windrow Dien.
The French had decided to set up an air supplied base deep in the hills of Vietnam. The purpose of this was to cut off the supply lines in Laos, and to draw the Viet Minh to fight to their doom. Little did the French know that that had set themselves up perfectly for the Viet Minh. The Viet Minh had heavy artillery, which happened to include anti-aircraft guns. They were able to move all their weapons to the mountains that overlooked the French base, thus allowing them to fire most accurately into the encampment. The French refused to give up and ground combat resulted, much like that of World War I. The Viet Minh cut off most of their air supplies and continued fighting, gaining ground. Finally after two long months the Viet Minh took over the encampment. Most remaining Frenchmen surrendered. Many fled into the wilderness to escape and the Viet Minh hunted them down; despite the great loss of their own soldiers. Soon thereafter the war ended with the Geneva accords, where the French agreed to withdraw their troops from its former Indochinese colonies. Eventually this split the country in two. They rejoined the fight later in 1959 in the Vietnam War, also known as the Second Indochina War. 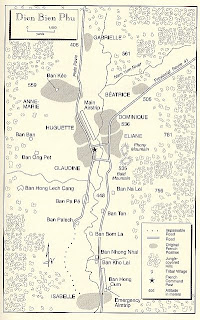 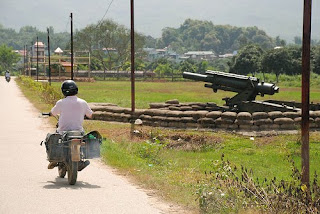