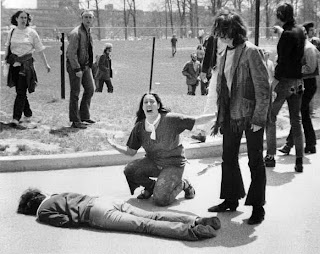 The Kent State Shootings
The Kent State shootings or Kent State massacre was a shooting that involved college students who were protesting the American invasion in Cambodia. The date was Monday, May 4 1970. Upon protesting the movement, the Ohio National guard shot these unsuspecting and unarmed victims without question. Many of the students shot in this massacre however were only students who had just happened to be walking by at the time, or observing the protest from a far away area. As a response to this event many college universities closed their doors in order to protect students and to stop the protest of four million students around the country. This protest had divided the country in half.

The day had started out normally; the protest was planned three days earlier and was scheduled to take place at noon. They began by ringing the campus’s iron victory bell to attract the attention of nearby students. Upon hearing this and fearing it may escalate to a violent protest Companies A and C, 1/145th Infantry and Troop G of the 2/107th Armored Cavalry, Ohio Army National Guard attempted to stop the protest. Upon approaching the students in a jeep they were greeted by the throwing of stones, and were forced to retreat. As a result they quickly readied their weapons and began to approach the students. This in turn dispersed the students into many directions. Confused at what to do next they made quick rounds pointing their guns in different directions to clear out the areas. Once again upon straying close to the students, who once again were throwing rocks and gas at them, they retreated. It was once they cleared some distance that a group of guards quickly turned and fire their rifles, killing a large amount of people.
Video Link: http://www.youtube.com/watch?v=Gv4u5dIRouM
Quotes:
Unknown speaker 1: "Suddenly, they turned around, got underneath, as if they were ordered to, they did it all together, aimed. And personally, I was standing there saying, they're not going to shoot, they can't do that. If they are going to shoot, it's going to be blank."
Unknown speaker 2: "The shots were definitely coming my way, because when a bullet passes your head, it makes a crack. I hit the ground behind the curve, looking over. I saw a student hit, he stumbled and failed, to where he was running towards the car. Another student tried to pull him behind the car, bullets were coming through the windows of the car.
"As this student fell behind the car, I saw another student go down, next to the curb, on the far side of the automobile, maybe 25 or 30 yards from where I was lying. It was maybe 25, 30, 35 seconds of sporadic firing.
"The firing stopped. I lay there maybe 10 or 15 seconds. I got up, I saw four or five students lying around the lot. By this time, it was like mass hysteria. Students were crying, they were screaming for ambulances. I heard some girl screaming, 'They didn't have blank, they didn't have blank,' no, they didn't."
Posted by Austen Tabor at 11:02 AM