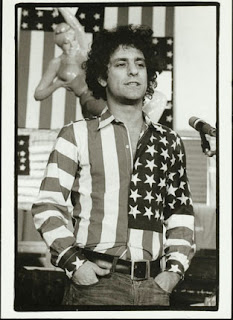 Abbie Hoffman
Founder of the Youth International Party (“Yippies”), political and social activist Abbie Hoffman was the voice of the anti-Vietnam movement. Hoffman was a well respected student, receiving his B.A. in American Studies at Brandeis University and achieving his Masters in Psychology at UC Berkeley. During the war he often used symbolic theatrics and comical tactics to influence the youth to become more politically active. In one demonstration he gathered 50,000 followers and ‘attempted’ to levitate the Pentagon by using ‘psychic energy’. At Woodstock he stormed the stage while The Who was performing and took the microphone to say a couple sentences about John Sinclair, an activist whom was imprisoned for giving away a couple joints to come undercover cops. He was quickly knocked off stage by the guitar of Pete Townshed. During the Democratic National Convention of 1968, a riot ensued between law enforcement and the citizens of Chicago. He was arrested and tried as part of an activist group who was ‘responsible’ for inciting the riot, known as the ‘Chicago Seven’. They were sentenced to five year in prison but was overturned by the Chicago Court of Appeals. In 1971 he published Steal This Book, in which it advised readers on how to live life free of charge.
Posted by Mike Holt at 11:35 AM