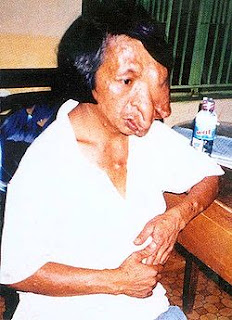 Agent Orange was a defoliant and herbicide used in the Vietnam War by the U.S. The goal in using this chemical was to minimize the dense forests of South Vietnam. In fact, over 21,000,000 gallons of Agent Orange was sprayed over 20% of South Vietnam’s jungle in a nine year period. For what seemingly harmless herbicide, this chemical had huge repercussions.
Practically 5 million Vietnamese were exposed to this harsh contaminant. From it, there were 400,000 deaths and disabilities. Furthermore, half a million children of those who had been exposed to it had birth defects. Many of the tests and studies on these health effects were done by Vietnam scientists. In the picture is someone born with this defect as a result of Agent Orange.
Posted by RO88Y at 11:17 AM