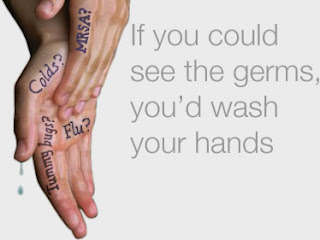 The most influencial sentence in the essay "On Washing Hands' would be ,"Each year, according to the U.S. Centers for Disease Control, two million Americans acquire an infection while they are in the hospital. Ninety thousand die of that infection". Being a main theme of "Washing your hands". The quote provided clearly shows that not enough people are washing there hands. It is not something that takes long to do, and if done properly then we would be able to wipe out a few diseases or lessen the amount of others as well. Washing hands is something they teach you to do in elemtary school, where they require kids to fallow specific rules as to how to wash them and signs on the walls with step by step directions. As people get older, they feel that they do not need to wash them as often or that they are not the "people" who spread the diseases from coming in contact with others. I think this essay is accurate as to why a lot of diseases are spread, becauase I personally always watch as people leave the restroom without washing their hands, or sneeze and cough in their own hands too. It disgusts me when people have the time to wash their hands, they just don't. It is becomming more and more important these days, because of the statistics of airborne and contact diseases. If anything, people need to use sanitation gels or other hand products because after thinking of every thing we would touch in one single day, it's a nightmare as to what you catch daily. People just need to start washing their hands more and taking more hygiene procautions to become healthier and keep the world around them healthy as well. 2 million Americans could be cut in half or even eliminated, and ninety thousand deaths could be prevented because of a simple 2 minute routine squeezed in to your busy schedule. It is important to remember and could help save peoples lives, so just do it already.
Posted by kayla peressini at 10:35 AM