The Boldest Writing of All Time 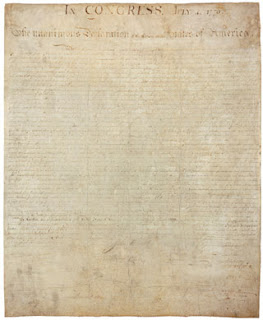 The Declaration of Independence is one of the boldest writings of all time. Written to the King of Great Britain, this letter makes a firm stance on the beliefs of America’s fore fathers. In this declaration to the most powerful country of the 18th century, there are a few themes and points the writer, as well as the signers, give.
The first theme this essay gives is their right. Not just their right as countrymen, but their right as a human being. “That whenever any Form of Government becomes destructive of these ends, it is the Right of People to alter or to abolish it.” Their RIGHT to abolish and break from an oppressive government is the first stance this essay takes.
The second point these fore fathers bring up is the abuse they have suffered with the King. Notice here how they singled out the king, not the government as a whole. I could only imagine the look on his face when he read this letter! Sentence after sentence and paragraph after paragraph, they continue to list all the offenses he has made toward them.
Both final and critical is this last theme in this declaration. Here they officially declare themselves apart from Britain and now the “Representatives of the United States of America.” The men knew the grave danger and trouble they would be in for such a position as this by declaring that they would pledge each others’ lives for one another. This is one of the boldest if not they boldest writing of all time.
Posted by RO88Y at 11:10 AM