Ain't scared of your jails 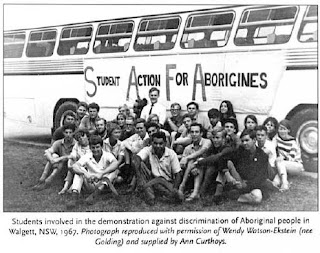 Ain't scared of your jails was a very moving and thought provoking film to me. As remember learning of the civil rights movement as far back as in the 4th grade, but I never really was able to see the atrocities and the struggles that went on during the movement until I watched this film. The things that went on in that dark chapter of our history were horrifying and it was only worse 1st hand. What stuck out the most in the film in my mind was the part about the "freedom rides" and the public's response to them. The "freedom rides" were a series of protests against the segregation in the south. On these rides, blacks would sit in the front and whites would sit in the back, and when they would stop at rest stops the white people would use the black facilities and the back would use the white facilities. James Farmer, a freedom rider, described the idea of the protest like this: "We decided the way to do it was to have a group, an interracial group, ride through the South. This was not civil disobedience, really, because we would be doing merely what the Supreme Court said we had a right to do. The whites in the group would sit in the back of the bus, the blacks would sit in the front of the bus and would refuse to move when ordered. At every rest stop, the whites would go into the waiting room for blacks, and the blacks into the waiting room for whites and would seek to use all the facilities, refusing to leave. And we felt that we could then count upon the racists of the South to create a crisis so that the federal government would be compelled to enforce federal law. And that was the rationale for the Freedom Ride." The deeper the freedom riders rode into the south, the harsher the southern rioters meeting the non-violent freedom riders would be. The actions committed by the rioters were horrifying but, I am glad I was able to see the film as turning a blind eye to the past would be a dishonor to those who made such great sacrifices back then so our society could progress to where it is today.
Posted by Jake at 9:22 AM